Twelve months in the lives of our global Charity Committees

As Mohammed Ali once said: “Service to others is the rent you pay for your room here on earth.”

Well aware of the privileges they enjoy, Trafigura staff from London to Lima are training, running, baking, planning and giving up lunchtimes and evenings to raise money to help others via their local Trafigura Charity Committee.

The number of Committees is growing steadily, and now totals 12 worldwide. Part of the remit of the Trafigura Foundation is to help new Committees get off the ground; another of our roles is to ensure that any funds raised are equalled - dollar for dollar. This is known as the Trafigura Foundation’s ‘Matching Funds’ scheme. We are delighted to report that last year was particularly fruitful, with staff getting involved in myriad ways to contribute to their immediate community, raising a total of USD 382,500.

A treasure hunt; painting and decorating a crèche; running a marathon; cooking food for a children’s party; a 160 km bike ride around the lake; moustaches for Movember; a cycle challenge; weekly lunch donations; food parcels for high school kids; help with homework; secret Santa; football tournament; a summer party; Christmas goodie bags; a Thanksgiving party; a golf tournament; a Dragonboat race; a cake sale…are just some examples of the kind of activities initiated by the different Charity Committees to raise money for people in need. 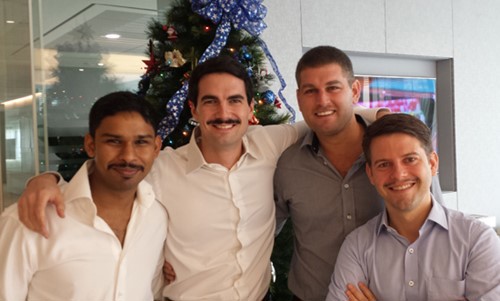 Pick a city to find out what the local Charity Committee got up to in 2013: Athens, Geneva, Johannesburg, Lima, London, Montevideo, Mumbai, Shanghai, Singapore, Stamford.

Athens, Greece: “The food of love”

Despite their small size, Athens is one of Trafigura’s most active Charity Committees. In 2013, the group nominated three causes. Due to the country’s on-going socioeconomic situation, Athens’ focus was children, especially those from disadvantaged backgrounds. Organisations chosen included SOS Children Villages, which recreates real ‘homes’ for children who have been abandoned or orphaned, and the Eliza Foundation, which provides homes to abused children up to seven years old. Floga, a local association for parents of children with cancer, also came under Athens’ aegis. The six Charity Committee members and local employees make a point of really getting involved with their causes. At one of the Villages, in addition to Trafigura’s fuel grant of €80,000, staff organised a day-long treasure hunt, and everyone pitched in to offer delicious home-cooked dishes for the event.

The Geneva Charity Committee currently counts 13 official members. As part of the Committee’s activities, members supported local organisation ‘Carrefour Rue’ (Crossroads), which offers targeted assistance to the homeless and destitute in the form of lodging, food, activities, transport and creative workshops. In this, one of the world’s wealthiest cities, where poverty is present but under the radar, the work of Carrefour Rue is integral to helping the socially excluded lead a dignified life. The Geneva Charity Committee also have ambitious plans for the coming year and are already planning a competitive Dragonboat race, going up against other companies including Bunge and Credit Suisse. The event, due to take place in August 2014 is part of fundraising efforts for the ‘Paddle for Cancer’ campaign organised by Switzerland’s English Speaking Cancer Association.

Murals and music for medical establishments

In addition to the core charity fundraising locally, a group of ‘Trafletes’ from Geneva also flew to the UK to support colleagues running in the London Royal Parks Half Marathon for four charities. Other sporty Geneva locals joined in a round the lake bike ride to raise money for the Anouk Foundation. Anouk introduces uplifting murals and music into medical institutions, to create a more soothing environment for children on paediatric and surgical wards. Together, Anouk and Trafigura managed to raise 40,000 CHF, which, with the Foundation’s ‘Matching Funds’ scheme blossomed into 80,000 CHF. This wonderful contribution enabled Anouk Foundation to take their inspiring art into an elderly care residence and a home for disabled teenagers.

2013 saw the highly active Johannesburg Charity Committee cycling, walking, and painting for a whole host of great causes, including the local Napo Crèche. When Trafigura first came across the care centre, it was lacking in carpets, windows and a roof. Since that time, the Committee focuses most efforts on generating funds that make the environment more appealing for the children. Last year kicked off with a Fun Run in March, followed by a collective painting and decoration project, over a weekend in October. To-date, the Johannesburg Charity Committee has raised funds to install carpets, a roof, a fridge and stove, proper storage, toilets and more. A cycle challenge in November helped raise funds for other causes close to their heart: a home for the disabled and the ‘Itirele Feeding Scheme’, which provides fortnightly food parcels to high school students. On top of that, this motivated team gets together every Friday to donate the extra food from their monthly lunches to a 150-strong group of children at the local church. For the children, ranging in age from 4 to 16 years old, this is sometimes their only meal of the day. 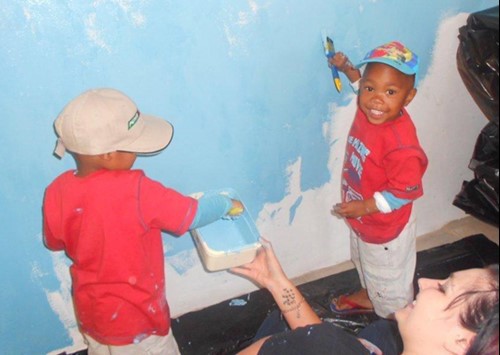 Nine hours from Lima, the tiny village of El Pedregal at 4,000 metres altitude is inhabited mainly by shepherds and is home to an isolated, rural community. In 2007, the Solidarity Group of Trafigura – the charitable arm of the Lima office - embarked on a long project to make life and the local school vastly more comfortable for the children, who often had a two-hour journey on foot to get to class. The Solidarity Group were determined to make the Pedregal school a role model for the area. Calling upon high-level authorities, from local mayors to the ministry of education, six years on, the local Trafigura office succeeded in transforming conditions for the school. The educational programme is now a resounding success and the school is equipped with greenhouses to grow vegetables. A state of the art solar energy system, together with Internet access, is opening up a new world of knowledge for the kids. We are excited to report that the triumphs of the elementary school led, in 2013, to the building of a new Secondary School, the first ever in this desolate area, which will reach a whole new generation of children. 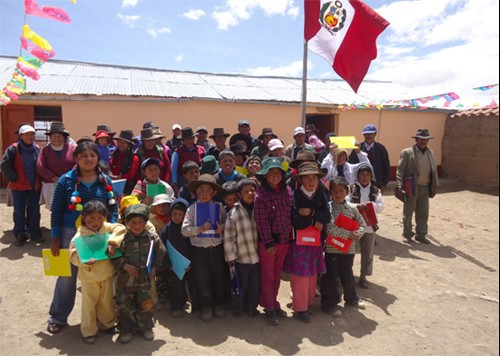 London, UK: “We make it easy to get involved”

The London Charity Committee (LCC) is one of the most well-established in the Trafigura Group. Made up of just four members, 2013 saw the team rally staff to raise over GBP 13,000 for Refuge, their charity of the year. In November, the LCC elected a favourite cause for the next twelve months, The Rainbow Trust, which assists seriously ill children. Preparations began at Christmas when staff chose gifts for the kids, which were couriered directly to the hospitals. Staff also visited two Rainbow Trust charity shops (thrift stores) to help out for the day; a competitive twist was added to see which outlet could make the most money. Compassionate to the core, the LCC is also ready to act with spontaneous gestures; when Typhoon Haiyan hit the Philippines, staff got busy at home, making cakes to raise funds.

The Montevideo Charity Committee has just been created, reflecting the development of the office into a regional hub. The Committee already has 20 fixed members. One of the Committee’s first activities was to organise a Secret Santa for “La Esperanza”, an association that provides tutoring to over 70 disadvantaged children and their families in a small school, during after-school hours. The Committee is now planning several fundraising activities for 2014, which include some eco-friendly outings and recycling ideas. 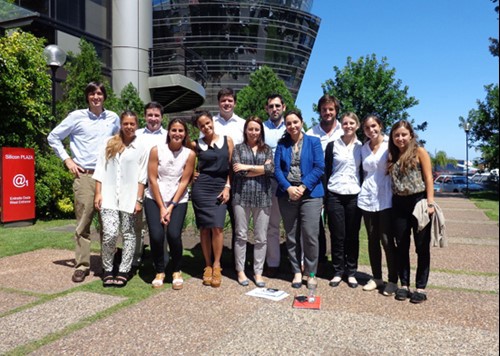 Just like the other Charity Committees around the world, the Mumbai Charity Committee is made up of employees from diverse functions, and has nine permanent members. Last year, traders, operations, treasury, IT and management came together to fundraise for Rang De, an innovative online lending platform for micro entrepreneurs, which is also supported by the Trafigura Foundation. The team also sought to formalise processes by creating the Trafigura India Trust and requesting tax registration. 2014 got off to a great start with Committee Chairman Ayush Sharma running in the Standard Chartered Mumbai Marathon. For the coming months, Mumbai is talking to more Indian charities, including MagicBus, a mentoring programme for children, and Concern India, whose strong social- entrepreneurial focus ‘helps people to help themselves’. Watch this space for their updates.

The Trafigura office in Shanghai has recently established the ‘Shanghai Charity Foundation’ (SCF), which will support causes in the fields of health and education. Specifically, Shanghai wishes to help the elderly, disabled and the disadvantaged. Some of the programmes already under consideration by SCF include a cataract surgery project, stem cell transplants for leukaemia patients, access to medical treatment for low-income patients with serious illnesses, and scholarships for disadvantaged students. Ideas for fundraising stem from similar past events organised by the Shanghai office, such as a football tournament and a summer party. With a strong organisational structure and bags of enthusiasm, we’re very excited to see how Shanghai will fulfil its mission, namely to be active ‘In Society, For Society’.

In 2013, the Singapore Charity Committee chose to sponsor MINDS, the Movement for the Intellectually Disabled of Singapore. MINDS is dedicated to celebrating and empowering this community through schools, centres and assistance programmes. At Christmas, MINDS partnered with 20 other voluntary welfare organisations to raise money for 6,000 Christmas Stockings (goodie bags) to be given to children and adults with intellectual disabilities or from disadvantaged backgrounds. The Singapore Charity Committee sponsored 260 stockings, covering all the beneficiaries at the MINDS Lee Kong Chian Gardens School.

Almost every other month, from March to December, the small but mighty Stamford Charity Committee rallied staff to join in their highly successful fundraising activity and community support work. The main focus was on the nearby Trafigura-supported ‘Work & Learn’ Centre, which helps disadvantaged youths gain vocational skills, setting them on a positive path for reintegration in society. Stamford also raised funds in spontaneous gestures for victims of global disasters including the Oklahoma tornado, Philippines typhoon and for the Sandy Hook Fund. A hallmark of Stamford is their ability to put the ‘fun’ into fundraising with their yearlong calendar of events: no less than three parties (Thanksgiving, cycling and Holidays), as well as a golf tournament. Men had a special opportunity to play a part, with ‘Movember’ men’s health awareness, which raised nearly 2,000 USD.