Fundraising for a cause doesn’t always need to be in the framework of a charity committee. In Trafigura’s office in Calgary, Canada, a bunch of guys are making waves in the local community as they get together for golf… and to do good.

It comes as no surprise that the biggest charity golf tournament in Calgary, the Crown Royal Invitational, is named after a local whiskey. That’s because Iain Singer, VP of Crude Oil in the nine-strong Trafigura team in Calgary is an example of how to put the ‘fun’ into fundraising. An informal meet-up six years ago has grown into a major event and, after a competitive day on the green, it is the gold – both of the hard and rye variety – that flows in the evenings as a group of 40 golfers in good spirits use silent auctions to raise cash for causes.

Here, in his own words, Iain explains the growth of his golf tournament and how a highly sociable weekend in June has grown into a regular fixture with a solid waiting list - and one of the most keenly awaited social events on the trading calendar.

A fun weekend with a competitive edge

“Six years ago, an industry colleague approached me with the idea of organising a golf weekend for a group of local crude oil traders from the Calgary-based companies we worked with. Individually we had the opportunity to attend hosted functions over the year but felt a ‘pay your own way’ outing would be a good way to kick off the golf season and get the guys together for a fun weekend in a resort three hours west of the city. Being a group of extremely competitive traders some type of prize was required to ensure we maintained a competitive spirit as well as to encourage the appropriate levels of banter leading up to and through the event.

“As such we decided on a Team Draft followed by a Calcutta [an open auction held in conjunction with a golf tournament, whereby bids are held to ‘buy’ a contestant] to raise a cash pot to be awarded to the winning foursome. We also felt this was a great opportunity to give something back to the community and decided that 50% of the pot would go to a local charity.

“The event is spread by word of mouth and takes place the third week in June, before the summer kicks off, and just around father’s day. The aim is to raise as much money as we can, have a good time, and get back in time for our families.

“As we prepared for our first tournament, one of our industry colleagues was going through a personal battle as his eldest daughter was fighting leukemia and was being supported by a local charity, Kids Cancer Care. We decided that this would be our designated charity for the year. In the first year, we had 24 attendees and raised ~$3500 for the charity as a direct result of our Calcutta proceeds. Since then we have maintained our relationship with KCC and have added a second charity, “PREP” to include children with Down Syndrome, a condition that has also affected the families of local traders.

“Six years on, we have had significant growth in all aspects of the tournament: for the last four years we have had 40 golfers and in excess of 60 different industry players have participated, leaving us with a waiting list to get in next year. The most significant area of growth has been the monetary contribution made on behalf of the Crown Royal Invitational.

“This year we will donate ~$69,000 to local charities. A large part of that growth has been a result of the support of the Trafigura Foundation. Success feeds success: as the interest and credibility of our event increased, so too did the level of individual and corporate donations. After six years we have donated close to $225,000 to local charities.”

Having fun… and making a difference

“Our motto is “It’s for the Kids”. However, through this event we have found a way to pull industry colleagues together for a fun and competitive weekend while making a significant difference along the way. In the future we’ll keep the numbers as they are for a manageable level of participants. People drop in and out, which keeps the numbers stable. We’ll be changing the prizes, including sports jerseys signed by professional hockey players, and continue to choose charities that are close to our heart.” 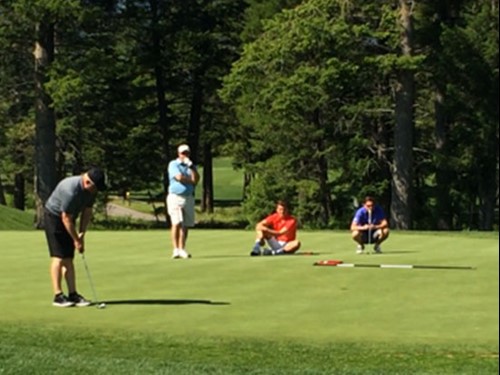