Bateau Genève: providing a port in a storm

To outsiders, the Swiss city of Geneva, one of the wealthiest in the world, is largely home to the lucky ‘one percent’. Despite its fortunate position, Switzerland is experiencing the same types of social problems as its troubled European neighbors: homelessness, a widening gap between the ‘haves’ and ‘have-nots’ and a growing number of working poor. Our long-term alliance with Bateau Genève – a shelter for some of Geneva’s marginalised and homeless – has provided a privileged but stark new look at the city’s poverty problem. Bateau Genève director, Eric Gardiol, explains how the tide is turning in this town.

Having supported Bateau Genève for three years, our official funding for this not-for-profit is coming to a close, but we are still keen to uphold close ties with this important association. In July, Trafigura hosted its summer party onboard the refurbished vintage paddleboat, simultaneously raising 15,000 CHF, which will go towards renovating the cafeteria and a new heating system. Currently, the Foundation is seeking to renew its partnership with this not-for-profit organisation, which is likely to expand its social activities and take measures to fight the consequences of extreme temperatures for its beneficiaries who live on the streets.

Literally offering a port in a storm, the Bateau opens its doors to ‘passengers’ - everyone who arrives with a need: typically economic migrants from Southern Europe and beyond, local adolescents with social problems or families fallen upon hard times. The Bateau team works on the front line dealing with of some of the city’s problems and by remaining close to their mission we are provided with useful insights as to the changing tides of social and economic instability in the city. 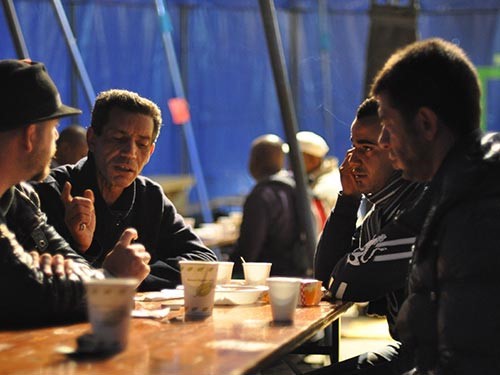 Through the partnership, the Trafigura Foundation has become aware of the shift in passenger profile following the economic crash of 2008. The nature of people’s problems in Geneva has become more acute and wide reaching, as Eric explains: “We used to primarily be a safe haven for men - mostly young males from across Europe, some with drug addictions, others desperate to get off the streets. The effects of 2008 took a while to trickle down, but in 2010 we experienced an upsurge in needs. Today we’re opening our doors not only to Europeans, but also to Swiss individuals affected by changes to the welfare system and an ongoing lack of work. Another new development is the increase in local and migrant families that seek us out.”

These unsurprising new realities are, according to Eric, linked to the political climate of austerity prevailing across Europe. A policy of cuts goes hand-in-hand with reduced social benefits, and these are being echoed in Switzerland. Recent laws passed in Geneva relating to unemployment and invalidity pay mean that jobseekers and disadvantaged locals are being pushed towards more precarious financial situations, tipping those in difficulty over the edge, and increasing the phenomenon of ‘working poor’. As Eric states, “with the cost of living here so high, single people struggle to get by on under 2,500 Swiss francs a month; families start to find it hard to make ends meet with less than 4,500 CHF.”

“Astonishing as it seems, a family in Geneva will struggle to get by on less than 4,500 CHF a month. Falling below that will start to send them under.”

It is associations such as Bateau Genève that attempt to stall these very real effects, as Eric states: “Year on year, as welfare benefits are cut, the number of people needing social aid increases. These groups don’t go away: they can’t miraculously find a job, and this is how people start to fall into a cycle of poverty. To compound the problem, few are aware of their social welfare rights. Part of our work is helping our passengers understand the types of support they’re entitled to, and assisting with the legal system. Legal aid isn’t our primary remit, but we can mediate when there are tensions, such as a fall-out with a landlord, or house people whilst they look for a job. This is how austerity measures don’t truly save money – they contribute to the pauperisation of a new class of people.”

Recent, but non-comprehensive studies by a Swiss charity revealed that 600,000 people now live below the poverty line in Switzerland, equating to 1 in 10 children. According to Eric, “…it is more shameful to be poor in Switzerland than anywhere else in the world” which may be why an estimated 40% of benefits go unclaimed – a figure which skews official data on real poverty in the country.

Passionate about his passengers and his purpose, Eric Gardiol is not without hope, and it is partnerships such as the one forged with the Trafigura Foundation that keep him buoyant: “I was really surprised but pleased that the Foundation was so informed and that employees made themselves available to us and were genuinely interested in what we do. The Foundation truly listened to our needs and adapted the funding possibilities to our realities. The partnership has helped us bring other corporate partnerships on board, and it’s models like this that will ensure the Bateau remains afloat. We look forward to the next wave of collaboration with the Foundation in the future.” 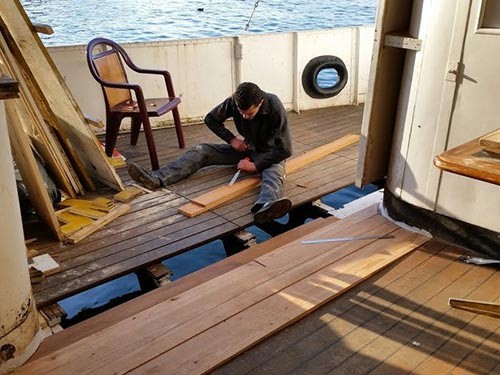 There are small ad hoc jobs available on board, paid by the hour